The church of Panagia Mesoxoritissa at the central square of Thrapsano

Thrapsano village is located in the province of Pediada, Heraklion prefecture, Crete roughly 30 km south-eastern from Heraklion and is built in an altitude of 340m.

It used to be community until recently, but after the "Kapodistria plan" (1998) it constitutes a municipal district of a homonymous municipality (Municipality of Thrapsano), which is also the seat of it. 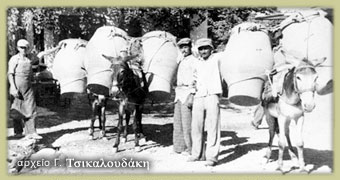 The village is - at least on the island of Crete– well known and particularly to seniors because of the Ventema.
Ventema was the summer campaign and temporary installation in the various places of Crete until mid September, of Thrapsano potters, in teams, where they manufactured big jars called “pitharia” and other earthen vessels.

Thrapsano is identified with pottery and particularly with the manufacture of “pitharia”, as its residents are considered descendants of the Minoan potters. Traditionally therefore the Thrapsano resident “Thrapsaniotis” is identified even today with the potter and in particular with the name of “pitharas”.

In the old times until the end of 40’s most residents in the summertime had pottery as their main occupation and they practiced it in the form of Ventema. The percentage of residents that dealt with ventema decreased constantly while ventema stopped in the end of 60’s. Afterwards we have the creation of permanent “kilns” (pottery workshops) around the village while in the last decades pottery has been developed still more and constitutes the basic occupation for many residents.

Today we can say that pottery, with the creation of modern workshops and the huge production that they carry out constitutes one of the main economic factors of the village growth, maintaining at the same time its tradition and its historical identity.

At any case the bigger percentage of residents are occupied with agriculture and more specifically with the cultivation of olive trees and vineyards (soultani, rosaki and wine grapes) while flower growing (mostly carnations, in greenhouses and in open fields) has its share in the general development of cultivations in the village.