According to the historian Stergios Spanakis (Towns and Villages of Crete, 1st Vol.) the most ancient indication of settlement is reported as Trapsiano and Thrapsiano in 1379 in the Ducal File of Hantaka (older name of Heraklion) documents.

With this second name it is reported in the Turkish documents. It is reported Trapsano in the 1834 Egyptian census with 38 Christians families.

During the Venetian occupation, Thrapsano was the feud of Kornaros family where they had built a mansion that is not saved today. Andreas Tzak. Kornaros, reports in his 1611 will, that he bequeaths his mansion and part of his voluminous library with books in Greek, Italian and Latin, to his brother Vitzentzo (well-known poet who wrote the great medieval work “Erotokritos”).

Particular reports exist for Livada in various historical texts. It is reported that this region Livadahad pottery clay, which was used by Thrapsano potters for the manufacture of earthen vessels. This region was in the feud of the Turk Elhatz Ali, who manged to get a “firmani” (order) from the sultan that ordered Thrapsano potters, to pay him 10 percent from the income that they had from the trade of the vessels, which were made of the clay of his property. The excavations in this region for pottery clay, constituted later the beginning for the creation of Livades lake that is today one of the most beautiful areas of the village.

It is also reported, that the Notarades family lived in the village, and they settled here after the subjugation of central Greece and the Peloponnese to the Turks.

The history of each place is written by the battles that were made in order to acquire and maintain the supreme: freedom. In this fight, that unfortunately was continuous in the past for our homeland, Thrapsaniotes as genuine Greeks participated and wrote history with their own blood. The village, as a minimal tribute, honouring those who gave their life in the battles for our homeland, has dedicated to them the "Monument of heroes". 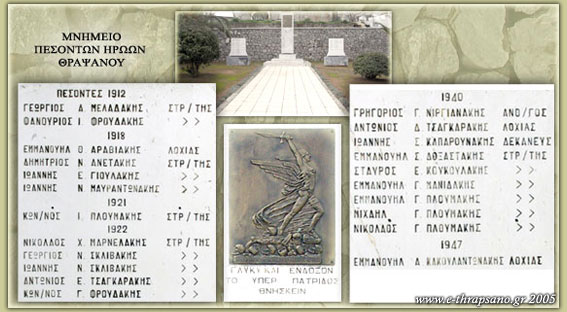