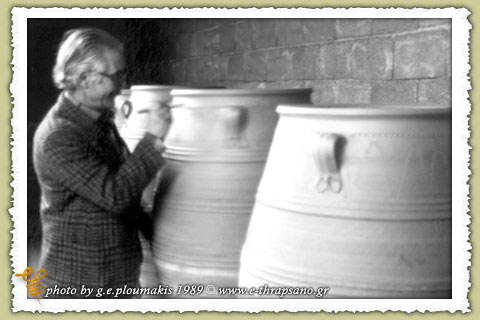 Studying the existing historical data about Thrapsano, in all cases, these are directly linked to pottery.
I mention below the historical data I have come across up to this day. 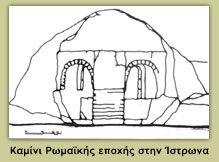 Kiln at IstronaThe discovery of a kiln at Istrona of Eastern Crete by Mr Davara with ceramic splinters which age is dated from Romanian times has particular interest, because it presents all the characteristics of "Thrapsano ventema". As Mrs Anna Guest-Papamanoli reports (Archaeology t. 9) the kiln is built on a mount slope, with a central earthen pillar and vaulted beams, precisely as Thrapsano craftsmen do, with clay and wood beside, while remains of a workshop exist in close distance.
To sum up I quote her words "it is possible that if Thrapsaniotes find the memory of ventema, from father to son, they can get to the potters that manufactured the kiln of Istrona in the Roman times". 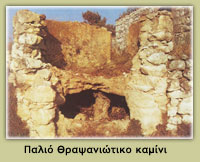 Xanthoudidis reports in the book "Glossikai Meletai" that probably Thrapsaniotes have been dealing dealt with pottery since the Byzantine era.

Agapios Landos (secretary of Andreas Kornaros, feudal lord of Thrapsano during the Venetian occupation) describes in "Amartolon Sotiria" that Thrapsano is populous and most of the residents are potters.

In the translations of the Turkish files by N. Staurinidis there is a report of the village "Trapsana nami digeri Comlekci" that means "Thrapsano or other name Village of Potters".
In the same translations the "Fermanion for the potters of the village Thrapsano" also exists as we have already mentioned in the page presenting the historical data of Thrapsano.

For the past fifty years many archaeologists, historians, and other scientists have been dealing with pottery and particularly with the ventema of Thrapsano.
According to the existing data the existence of ventema have been documented before the year 1900. The art of pottery in the form of ventema continued to be practised till the end of 60's. Decorative Pithari However the technological progress that has taken place, has also changed the materials and the equipment used, and as a result ventema was brought to an end.

The potters, from the 70's and later, started to make permanent pottery workshops around the village of Thrapsano. The "pitharia" (big jars) and the other earthen vessels are seen now adays more than decorative items rather than utensils.
Thus the pitharia, came out of the storage areas and cellars, and decorate the courtyards of houses and hotels. Nowdays, the modern means of transport have enabled the trade of the pitharia all over the world old pithati Fortunately this use, the decorative one was the main reason for maintaining the manufacture of pitharia and other vessels up to our days.
This, by all means, is not an accidental fact, if we take into consideration not only the primitive aesthetics but also the direct assosiation that the sight of a pithari has with the “ancient element”.

According to very important data that Mrs Betty Psaropoulou has recorded, after a long-lasting research for the ceramic workshops in Crete, and specifically for Thrapsano pottery, more than 167 "vedema" kilns in Crete were recorded in the last 100 years and up to 1995.
During the same period the data report the existence and operation of more than 101 permanent workshops around Thrapsano village, naming at the same time their owners.

Closing this historical retrospection we can say that pottery workshops have increased in number and have continuously been modernised, in the last decades. More and more young men are deal with the art, making senior potters happy, but also us who want the tradition of pottery to stay alive, as it constitutes our historical identity. 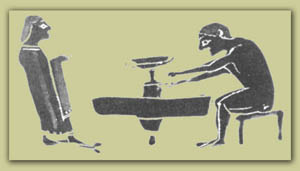 The Pottery art in Thrapsano 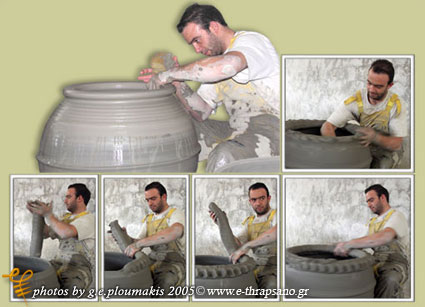 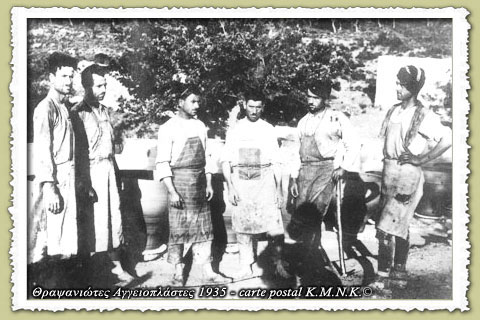